Brought to you by Tulsa Tech, 36 Degrees North and Prodigy & Co.

The popUP Sessions are a collection of “pop-up” workshops to educate, engage and entertain. The topics range from tactical marketing tips to leadership and organizational strategies to help you accomplish your goals. If you are a small business, a nonprofit, or simply a life-learner, these workshops are for you!

I’ve attended at least 15 popUP Sessions events over the last 3 years. Jessica assembled a heavy hitter crew of subject matter experts and charged only a nominal fee so anyone could afford the events. I’ve had opportunities to learn about using social media, photography and video for business. I’ve been directed to useful resources. We’ve used so many of the tools presented to start and now grow our HVAC business, Doc J’s Heat and Air.

“Thanks for the work you do in the community. Tulsa Hub has benefited greatly from the wisdom and contacts myself and other staff have achieved through taking these popUP Sessions trainings.” 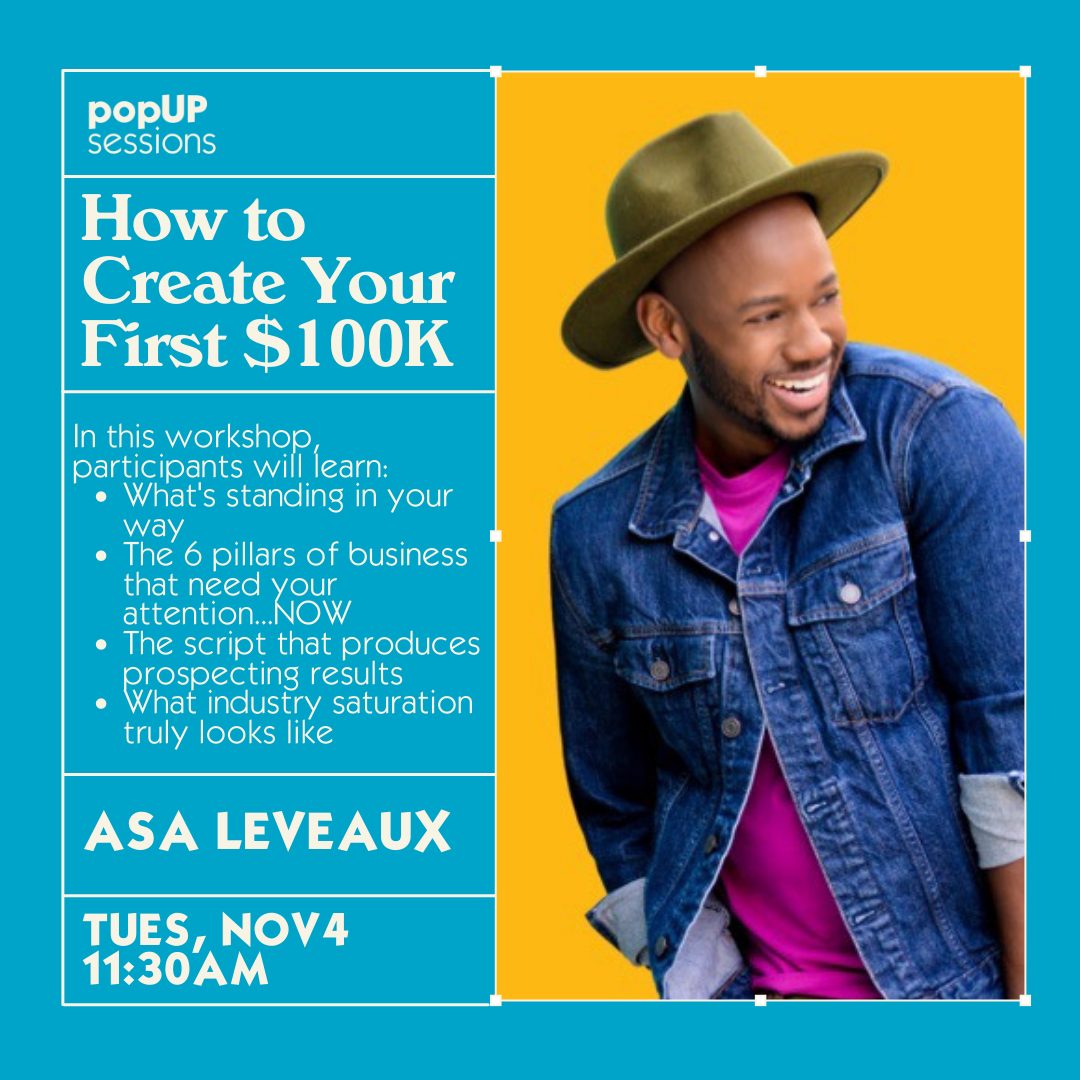 How to Create Your First $100K

In this workshop, participants will learn:

Led by Asa Leveaux, who delights in the fact that he has learned to operate within his personal motto of “possessing a joyous existence conceived by enlightened thought and achieved through love, passion and wealth”. As a result of working with Asa, service providers benefit from the done-for-you solutions that his business concierge agent, The Wealth Spa, creates. He revels in not being willing to leave anyone behind in the fulfillment of their dreams, a concept introduced by his 20 years in the US military where he was the recipient of the Bronze Star.

Asa is the best-selling author of “I Am Man Enough: 365 Affirmations for Men”, “I Am Woman Enough” and “Fuck Balance”. His latest book, “Black and Queer” is his first memoir. Leveaux has been featured in such publications as Forbes, The Wall Street Journal, Psychology Today, Black Enterprise and The Gayly. Asa often tells his audiences and clients that, “Everything is on the other side of you feeling focused and worthy.” 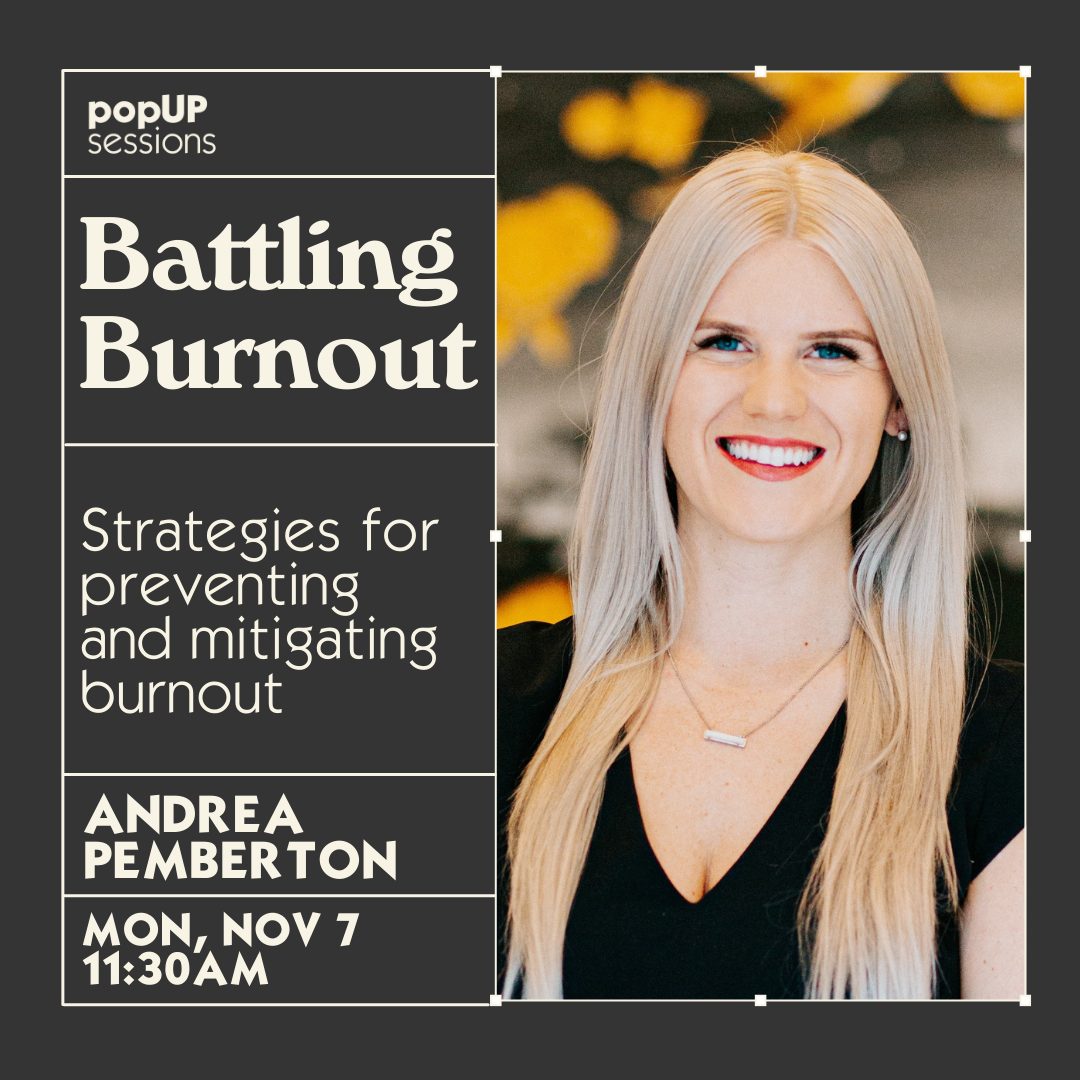 Throughout the pandemic, burnout rates among employees hit record highs as workers struggled to adjust to alternative work environments, manage increased workloads and juggle work-life balance. Burnout is a psychological syndrome associated with prolonged stress at work, and it has been linked to multiple negative individual health outcomes which threaten employee and organizational well-being. With burnout levels continuing to rise and contribute to the ongoing Great Resignation, it is important for individuals and organizations to address burnout head-on.

In this workshop participants will learn:

Led by Andrea Pemberton, consultant, facilitator, and Talent & Organizational Lead at Arrowhead Consulting. Andrea holds an MA in Organizational Dynamics from OU-Tulsa and is a published author on the subject of occupational burnout. 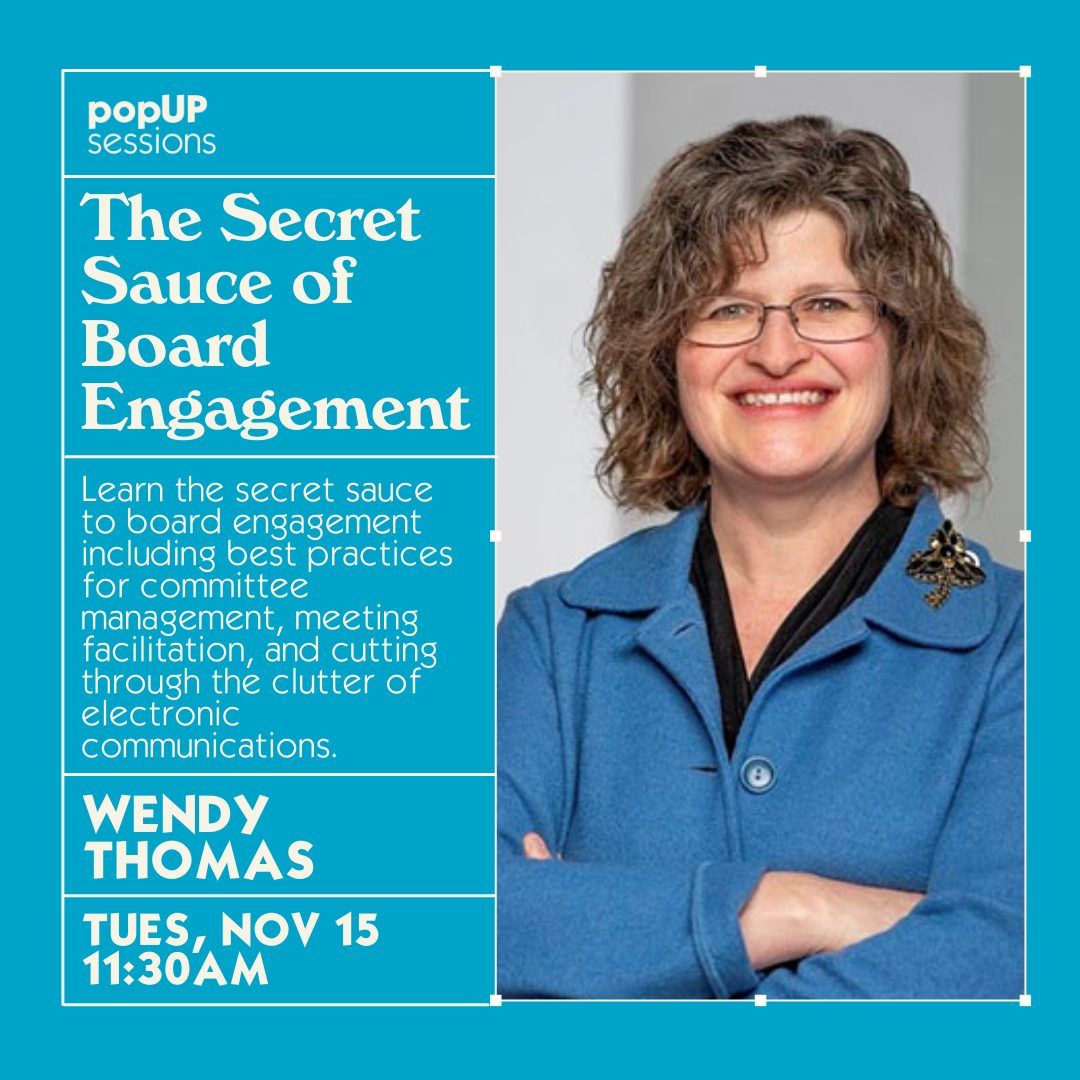 The Secret Sauce of Board Engagement

Board members are trustees on behalf of the community, governing the nonprofit organization to fulfill its mission and to operate in a legally and fiscally responsible manner.  But if you struggle to get them to volunteer for an event, show up to meetings, or return an email, you are not alone.  Learn the secret sauce to board engagement including best practices for committee management, meeting facilitation, and cutting through the clutter of electronic communications.

In this workshop, participants will learn:

Wendy Thomas is Executive Director of Leadership Tulsa and is a well-known presenter on board best practices and an adept facilitator of group process. She consults with area nonprofit organizations in the area of board development, strategic planning and organization capacity building. 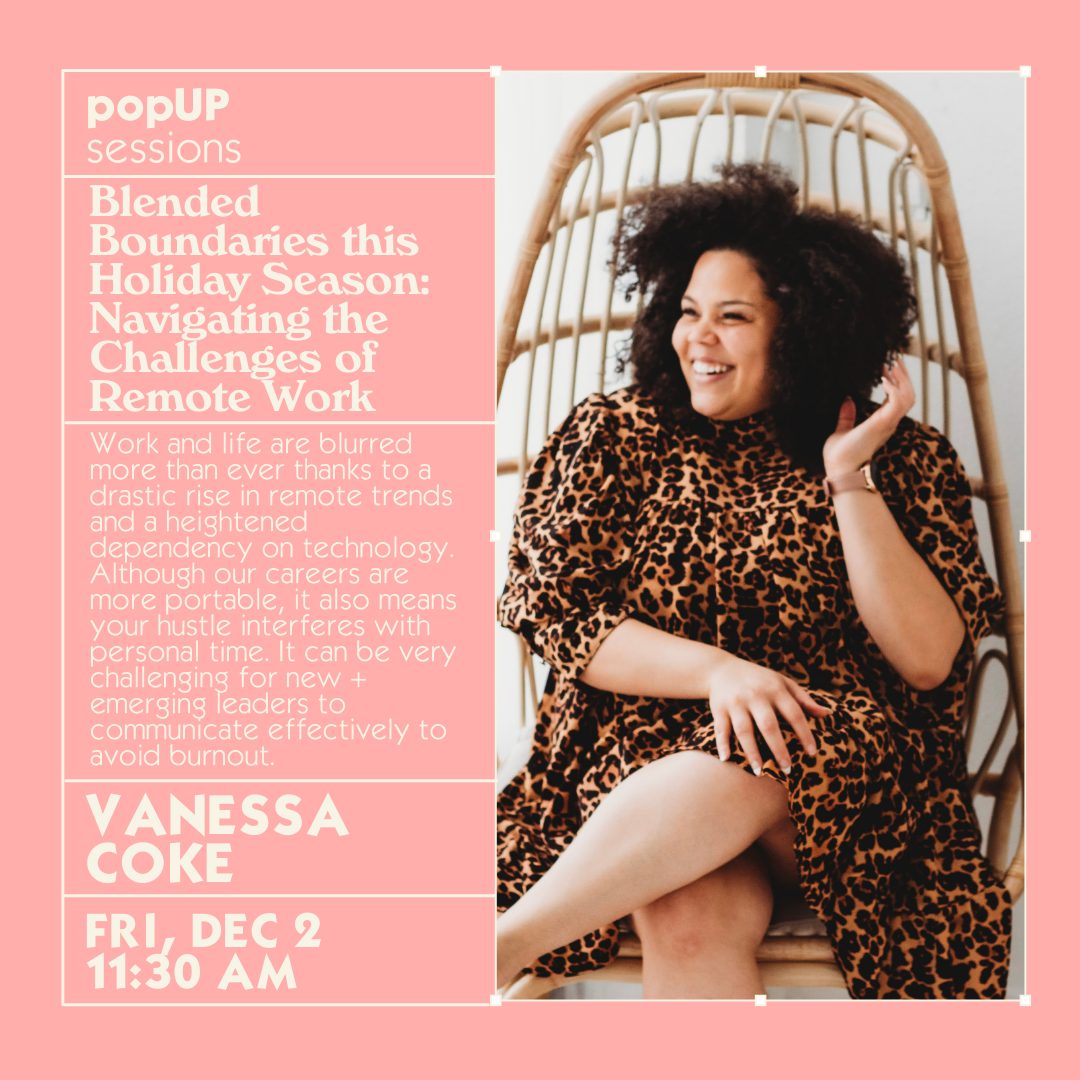 Work and life are blurred more than ever thanks to a drastic rise in remote trends and a heightened dependency on technology. Although our careers are more portable = it also means your hustle interferes with personal time. It can be very challenging for new + emerging leaders to communicate effectively to avoid burnout. In this workshop participants will learn: 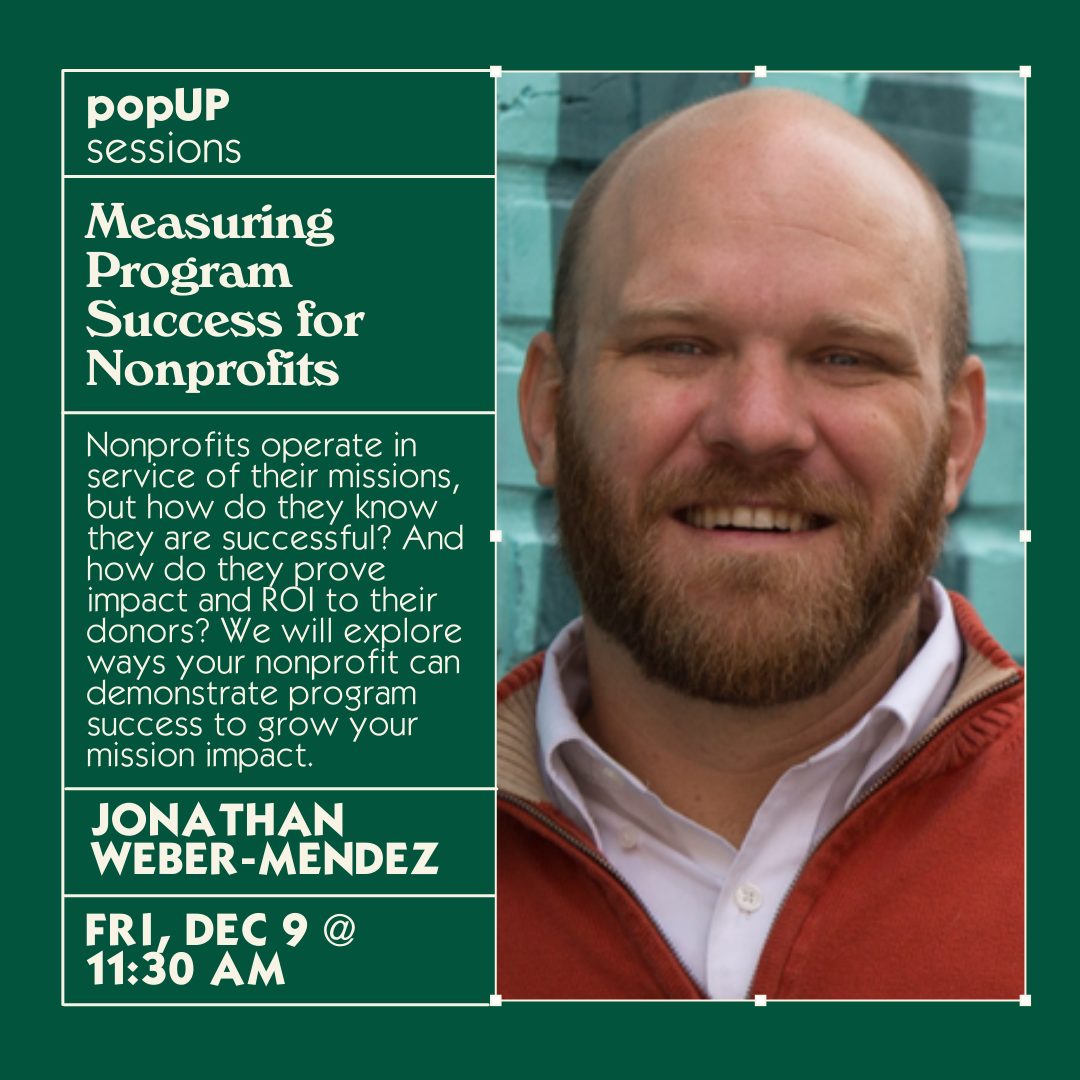 Nonprofits operate in service of their missions, but how do they know they are successful? And how do they prove impact and ROI (return on investment) to their donors? Measuring Program Success for NPOs will explore ways your nonprofit can demonstrate program success to grow your mission impact. Participants will learn:

Jonathan Weber-Mendez is a nonprofit fundraising professional with an MPA in Nonprofit Management. Since 2018, Jonathan has served Write On Fundraising working with both our nonprofit partners and staff to fulfill the company’s mission. As Director of Mission Impact, Jonathan helps equip staff with the education and resources needed to provide equity and compassion to philanthropy. Prior to joining Write On Fundraising, Jonathan served as a fundraiser for YWCA Tulsa and then Folds of Honor. Jonathan began his career of service in the United States Army where he deployed in support of Operation Iraqi Freedom.