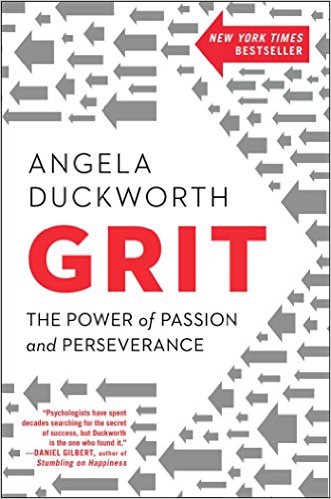 Book 16 for my #50BooksIn2016 challenge. Find out more about my commitment here.

I’ve been interested in the concept of grit for a while, particularly after watching Angela Duckworth’s TED talk and reading Flourish, which discusses her work. A large part of the reason I do the work that I do is to help people find more success and fulfillment in their life and their work – however they define it. I truly believe that creative thinking and problem solving can help people get where they want to go faster.

The idea of a character trait like grit that seems to be so predictive of many different types of success is fascinating to me. Would there be a way to incorporate any of those lessons in the creativity and innovation I teach to further increase the chances of reaching goals or is it something that can’t really be taught?

While I didn’t expect there to be easy lessons on how to be grittier, I had hoped for more direction. Not to downplay or knock Duckworth’s work, I think unfortunate answer is that, like most deep seeded character traits, it just isn’t that easy to teach. She provides some guidance on parenting or fostering grit in kids, and ways in which you can increase the grit in the culture of a team or organization, but there certainly isn’t a silver bullet.

I actually did not score that high on the grit scale, mostly due to my “lack of focus”. Grit is defined as a combination of passion and perseverance for a singularly important goal and, while I have a lot of passion, it was hard to answer affirmatively to the questions that measure perseverance because I do tend to jump from project to project. I’m curious to know if my work to increase the creative and innovative capacity of people, teams, and businesses would ultimately qualify as something I am focused as a “singularly important goal”, even though I approach it in a number of different ways.

Knowing that there are definitely areas where I could improve my grit, I took away a couple of key things. First, I can certainly improve my practice habits. The grittiest people, those who reach the top of their field, engage in many hours of deliberate practice – a highly structured activity engaged in with the specific goal of improving performance.  I know that personally I do not practice anything this way. I’m not sure exactly yet how to incorporate this into my work – maybe putting myself in more difficult situations where creative thinking is needed? Maybe I can be more deliberate and intentional with my writing? I do know that I want to work on it and the book gave me direction for doing so.

The second takeaway for me was the importance of surrounding yourself with gritty people. The chapters on teams and culture really reinforced the feedback loop of grit. Jason Silva talks a lot about how we shape our world and our world, in turn, shapes us. This is exactly what Duckworth discusses in terms of the grittiness of teams and cultures. While high-performing teams have strict requirements to be accepted that grittier people may be more likely to get, the effect of being on a gritty team is to increase grit in individuals. In thinking about the teams that I build and the people I will hire in the future, I want to make sure grit is a part of the team culture.

Overall, I found the book very interesting and informative. I appreciate that Duckworth doesn’t claim to have all the answers. She readily talks about areas that are still lacking empirical research. I would highly recommend the book, particularly for parents, teachers or others who have a significant influence on children.